Our Sweethearts Blend has returned in time for Valentine's Day! SHOP | Get free Priority Shipping when you spend $40 or more.

Finca Bella Vista sits on just over 6 acres of land and is owned by Wilfredo Lopez, who arrived in Valle del Cauca 35 years ago. 50% of the farm is planted with coffee and plantains, 30% natural forest and the remaining 20% is planted with food crops for the Lopez family. Wilfredo’s two young grandsons live on the farm and were the inspiration behind the art you see on the bag. Scroll down to learn more about the farm and our bag designer’s inspiration. Tasting notes of this microlot include kiwi acidity with brown sugar sweetness and a deep syrupy body.

Wilfredo spent many years as a coffee picker and day-laborer and saved as much money as he could. He arrived in the area at a time when everyone was selling off their land and fleeing to the cities to escape a violent insurgency. Wilfredo seized the opportunity, as he felt it would be his only chance to have a farm of his own, despite the danger of living in the area.

He married his wife, the daughter of a farmer on the other side of the hill, who later inherited the farm when her father passed away. Their two young grandsons now live on the farm with them, as their own children have moved to the cities to find work. They come back during both harvest seasons to help pick and process coffee.

The deep emotional connection they have to the little piece of land and what it has given to them is immediately obvious as is Wilfredo’s contentment with his decision to risk everything coming to Finca Bella Vista so many years ago.

“The overall look of the design is inspired by the work of Colombian artist, Fernando Botero. What struck me about the story of this farmer is that he's raising his grandchildren on his land. This is a pattern all over the world as younger people move to the cities to try to earn a living, leaving their children in the care of their parents. Grandparents sacrifice so much for the benefit of their families. The design is also a bit of a tribute to all of the wonderful grandfathers I met while I was in Floyd.” 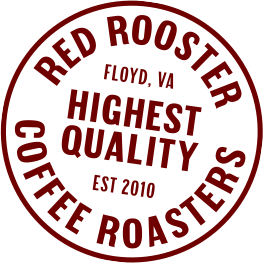